We refer to Hufkens et al. (2018) for an in depth description and worked example of the phenor R package. All code used to generate the referenced publication is provided in a separate github repository. Please refer to this paper when using the package for modelling efforts.

Keep in mind that some of the scripts will take a significant amount of time to finish. As such, some data generated for the manuscript is included in the manuscript repository. Some scripts generate figures and summary statistics on precompiled datasets rather than clean runs, when available. Furthermore, due to licensing issues no PEP725 data is included and some scripts will require proper login credentials for dependent code to function properly. Similarly, a download routine is not provided for the E-OBS data as to adhere to their data sharing policy and their request to register before downloading data.

The development release can be installed by running

Download a limited subset of the data described in Richardson et al. (2017) from github or clone the repository:

or download the full dataset from the ORNL DAAC.

Example code below shows that in few lines a modelling exercise can be set up. You can either download your own data using the phenocamr package and format them correctly using format_phenocam()

Alternatively you can use the included data which consists of 370 site years of deciduous broadleaf forest sites as included in PhenoCam 1.0 dataset (Richardson et al. 2017) precompiled with Daymet climate variables. The file is loaded using a standard data() call or reference them directly (e.g. phenocam_DB).

The gathered data can now be used in model calibration / validation. Currently 17 models as described by Basler (2016) are provided in the pacakge. These models include: null, LIN, TT, TTs, PTT, PTTs, M1, M1s, PA, Pab, SM1, SM1b, SQ, SQb, UN, UM1, PM1 and PM1b models as described in Basler (2016). In addition three spring grassland (pollen) phenology models: GR, SGSI and AGSI are included as described in Garcia-Mozo et al. 2009 and Xin et al. 2015. Finally, one autumn chilling degree day model (CDD, Jeong et al. 2012) is provided. Parameter values associated with the models are provided in a separate file included in the package but can be specified separately for model development.

Your own model development can be done by creating similar functions which take in the described data format and parameters. Below is the function to optimize the model parameters for the TT (thermal time) model using Generalized Simulated Annealing (GenSA). Uppper and lower constraints to the parameter space have to be provided, and in case of GenSA initial parameters are estimated when par = NULL.

After a few minutes optimal parameters are provided. We can use these now to calculate our model values and some accuracy metrics.

Easy model calibration / validation can be achieved using the model_calibration() and model_comparison() functions. Which either allow for quick screening for model development, or the comparison of a suite of models (using different starting parameters). I hope this gets you started.

An example of NASA Earth Exchange CMIP5 output and gridded Daymet data is provided below. 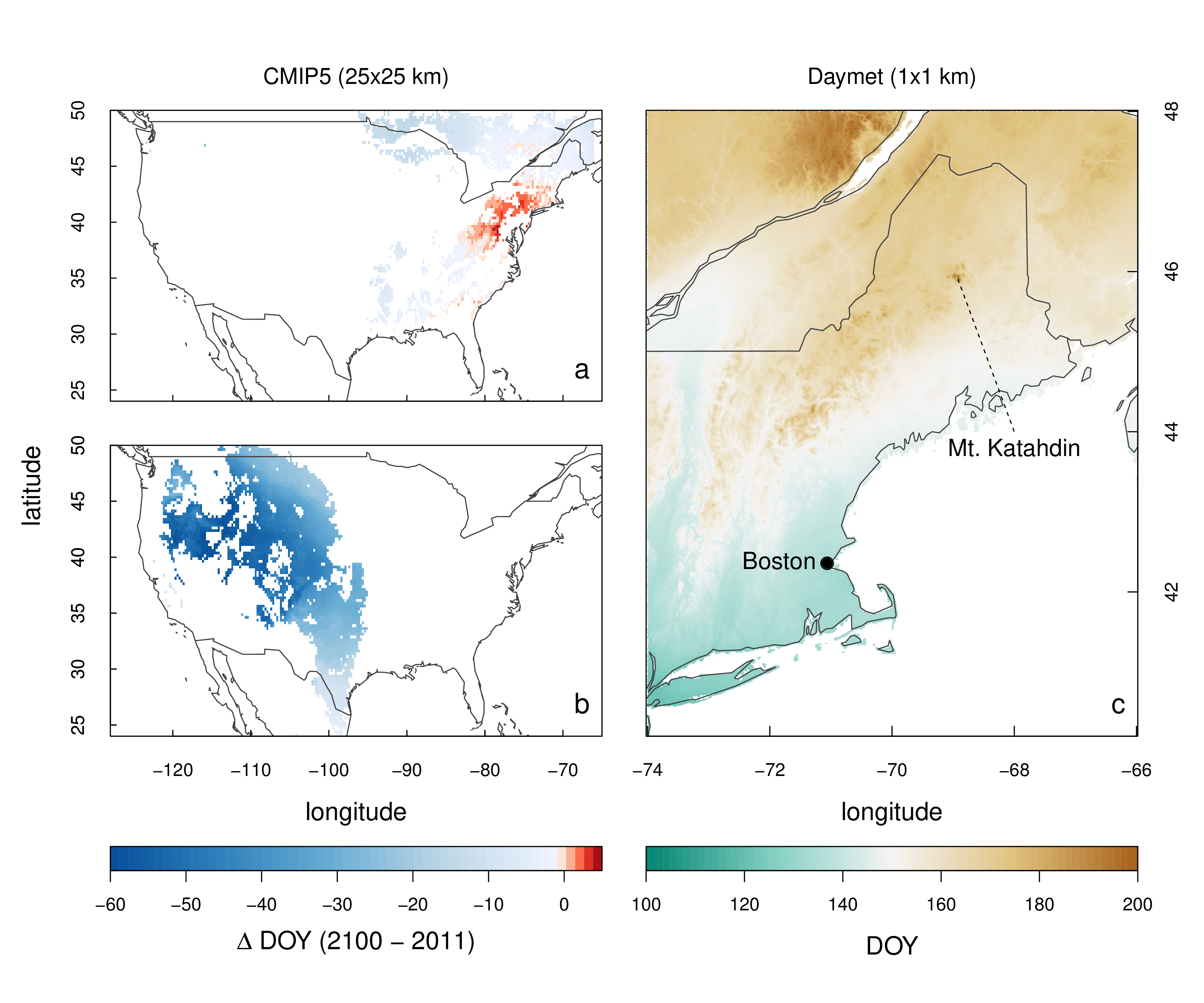 This project was is supported by the National Science Foundation’s Macro-system Biology Program (awards EF-1065029 and EF-1702697) and the Marie Skłodowska-Curie Action (H2020 grant 797668). Logo design elements are taken from the FontAwesome library according to these terms.